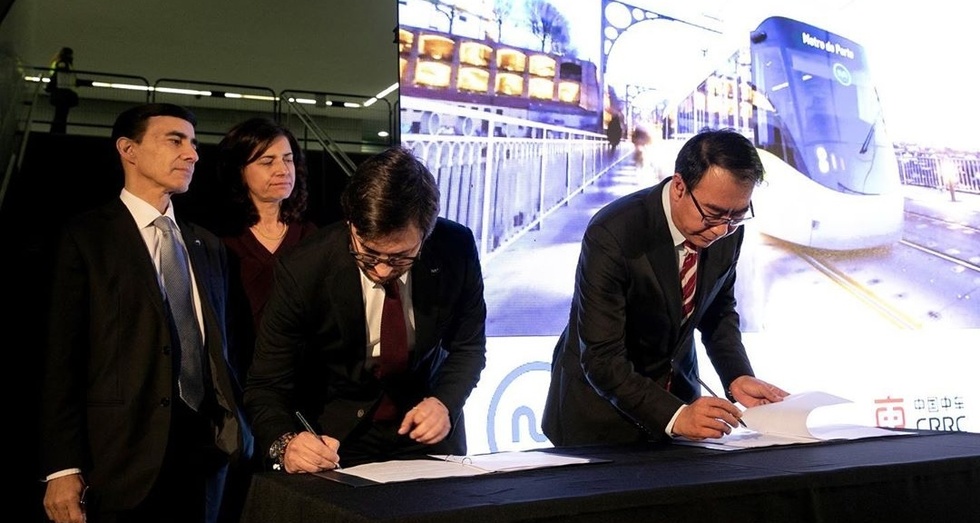 Metro do Porto celebrated on the 21st of January the contract for the purchase of 18 new vehicles. The new rolling stock is purchased from the Chinese manufacturer CRRC Tangshan for a global value of 49.6 million euros, fully financed by the Environmental Fund of the Ministry of the Environment, also including the maintenance of the trainsets for a period of five years. The objective of Metro do Porto is that these new vehicles can start to be delivered as early as 2021, contributing to an improvement in the offer throughout the network.

Founded in 1881, CRRC Tangshan Co is a Chinese company with a long tradition of producing trains, high-speed trains and metro vehicles. It's the world's largest manufacturer of railway rolling stock, headquartered in Beijing and employing more than 180,000 workers.
The new Metro do Porto vehicles will run on the various lines of the network, complying with all operational and safety standards. The vehicles capacity will be 252 passengers, 64 of which will be seated. These trains have two cabins and operate in bidirectional mode (like the current ones), reaching a maximum speed of 80 km/hour. With this investment, the Metro do Porto fleet will have 120 units - 72 Bombardier Eurotram, 30 Bombardier Tram-Train and 18 CRRC.

It is recalled that, last April, three competitors had responded to the international public tender for the acquisition of 18 new vehicles from Metro do Porto, launched just over a year ago, in December 2018. The tender procedure had the reference value of 56.1 million euros, including, in addition to the supply, the maintenance of these units for a period of five years. Metro do Porto achieved a reduction of 6.5 million euros compared to the investment initially planned.

The candidates proposals were evaluated in terms of price, technical value and design (including aspects such as capacity, comfort and accessibility). The new meters are expected to start being delivered between 2021 and 2023, at the rate of one per month. As mentioned and taking into account the increased demand that the system has been registering in a very consolidated way over the last few months, we will try to count on some of the new units - once produced according to the demanding specifications of Metro do Porto and properly tested on the ground - during the second half of 2021. Together, the new vehicles will be able to add 60 thousand seats per day to the regular operation.

On the other hand, the reinforcement of Metro do Porto fleet is also, and above all, due to the expansion of the network, which will have a new line in Porto - between S. Bento and Casa da Música, Linha Rosa - , and see the Yellow Line extended to the south, between Santo Ovídio and Vila d'Este, in Vila Nova de Gaia. The works for the new lines are to be starting soon, with construction work going on until 2023. The new Metro lines will add 6 kilometers and seven stations to the network, representing a global investment in the order of 300 million euros.

Metro do Porto operates in seven municipalities in the Metropolitan Area a network of 6 lines, 67 kilometers and 82 stations, used by more than 71 million users in 2019.